Near the end of my freshman year in college I visited New Orleans with a group of friends. We were there for a sorority convention, but arrived a day early so we could hang out on Bourbon Street. I believe there were four of us. Being from Texas and having lived a fairly sheltered existence up to then, it was my first time to visit the city. The other girls were all from Louisiana and were determined to show me a good time. And I was all in.

While I had been to plenty of college parties and drank my share of Zima's and wine coolers, I had never allowed myself to get "sloppy". Our first stop was Pat O'Brien's for one of their famous Hurricanes. I got the large. I couldn't taste the alcohol in my Hurricane and proceeded to drink it like it was nothing but Hawaiian Punch as we meandered down the bustling boulevard. Just wait. I get dumber as the night progresses. We stopped at another bar called "Tropical Isle" a little while later, where I was served a drink called a "Hand Grenade". I remember the souvenir cup in which it was served had the words "New Orleans' Most Powerful Drink" printed all over it. The accuracy of this claim is indisputable.

About halfway through the drink I started to feel woozy. I knew I was a lightweight, but was determined to keep up with the other girls so I finished the drink and did my best to hide just how drunk I was. We continued to make our way through the hustle and bustle, in and out of dance clubs and bars. Although every one of us were intoxicated at this point, we made a concentrated effort to stay together, continually checking to make sure we were all accounted for.

At one point we were in a bar and ran into a couple of guys the other girls knew from school. We were all standing around talking and dancing when the libations I had so quickly and carelessly sent down the hatch decided they should make their way back up. In a (failed) attempt to save myself from embarrassment, I ran out of the bar and around the corner. I was right next to the bar, but most bystanders were near the entrance, out of sight as I sat on the curb puking onto the street. Such a proud moment.

I hadn't been there but for a few seconds when I felt someone behind me. Male hands reached down and pulled my hair out of my face and asked, "Are you okay?" I turned around and recognized him as one of the guys that my friends had been talking to. I nodded, turned back around, and continued to throw up. He stood there holding my hair away from my face until I stopped. He then helped me up, reunited me with my friends, and suggested we all call it a night. He got my friends and I a taxi, and sent us back to our hotel.

This memory suddenly came back to me and I haven't stopped thinking about it since I read a story a couple of days ago about a Stanford student, Brock Turner, who was found guilty of raping a woman in early 2015. It has been all over the news because he recently received his sentence. He was found unanimously guilty of this crime, and prosecutors asked that he be sentenced to 6 years in prison. The judge, however, sentenced him to 6 MONTHS of jail time with probation because felt that "A prison sentence would have a severe impact on him." You see, he was a college athlete with a bright future hailing from an upper middle class family. Poor guy.

As if the story couldn't get worse, the father has recently written a letter suggesting that even the light sentence his son received is "a steep price to pay for 20 minutes of action out of his 20 years of life." Gee. I wonder if the victim has a slightly different perspective? Maybe not - I mean, this event hasn't changed her life in the least.

I did some research and found out that Brock has a sister. That's right. Dan Turner, Brock's father - the man who referred to the sexual assault executed by his son as "20 minutes of action", and whose biggest concern seems to be his son's loss of appetite for a good ribeye - has a daughter. I wonder if he'd feel the same about this situation if she was the one in the victim's chair. With his response to this situation, he has failed her. I am genuinely disgusted by this man.

Brock had been drinking that night as well, and blames his actions on poor judgment due to intoxication. I find it interesting that his judgment was skewed enough that it escaped him that it is NOT okay to penetrate an unconscious female, yet he was lucid enough to know to run when he realized he was spotted and being pursued by two passersby. Curious.

The reason this story has brought up my personal memory is because the victim admitted to being overly intoxicated and blacking out.

I was obviously overly intoxicated, and about a half hour after I got into that cab I blacked out, too. The boy who followed me out of the bar had also been drinking heavily and could have very easily done to me what Brock Turner did to his victim. But he didn't. He held my hair out of my face while I wretched in an alley. I used poor judgment. I was stupid for allowing myself to be over-served. But I hadn't done anything illegal - the drinking age in Louisiana at that time was 18. I was 19. Fortunately for me, the price for my stupidity was a hangover I will remember for the rest of my days. Not sexual assault. And it's BEYOND messed up that I feel like I should hunt down the mailing address of that boy and pen him a thank you note for not raping me when I was vulnerable.  Did you hear what I just said? That I am appreciative of someone FOR NOT VIOLATING ME when I may or may not have known what was happening?? Something is very, very wrong with that statement. But this is how backwards rape culture in America is today. And the way this particular story has played out has done nothing but perpetuate it. 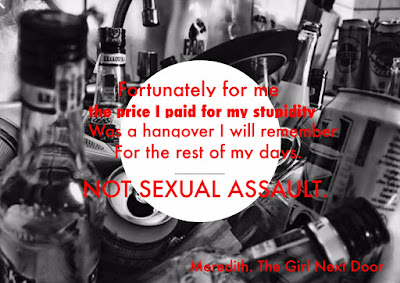 I have two children - a boy and a girl. I am terrified for both of them.

I will tell my daughter: It is absolute crap, but apparently you hold the burden. Your too-short-skirt is an invitation. Your intoxication is consent. Society has made these rules for you and I'm sorry. I'm so, so sorry.

I will tell my son: We have planted and sowed the seeds. We have done our best to impress upon you the importance of respecting women. It doesn't matter how flirtatious they are, how scantily they are dressed, or how much they have had to drink. Anything other than a VERBAL "Yes" means "NO". Go ahead and consider a verbal but drunken "Yes" to also mean "NO". If you choose to color outside of these lines, you have made the decision to become a criminal. This could forever and deservedly alter your future.  Because I guarantee that you've sure as hell altered hers.
Posted by Meredith at 12:04 AM