I don't know where to start with this post. I'm angry, which usually doesn't bode well for me when it comes to writing something with any hope of it turning out at all coherent. So I guess I'll just dive right in and see what happens.

I saw a post on Facebook (of course) that bothered me so much that I actually woke up in the middle of the night stewing about it. It was a rant about buying school supplies and how in the world one child could possibly need or use as much as was on the list. I get it. School supplies are expensive. I'm shocked every single year when I get through the check out line and watch my total grow and grow...and grow. It's amazing how paper and notebooks and folders and pencils and erasers and scissors and gluesticks add up so quickly. I'd be lying if I said I never perused one of my children's  school supply lists and begrudgingly thought to myself, "Seriously?!?" But here's the thing. I'm pretty damn fortunate - as are my children - that we can walk down the school supply aisle and I am able to tell them to pick out whatever glittery folder and bedazzled pencil case they'd like. That we can go over one aisle and pick out a new backpack that doesn't have stains all over it or rips along the seams, complete with a matching lunchbox if their heart so desires.

Remember that Facebook post I mentioned? Here's the part where I get pissed. It didn't end with a simple complaint about how much money was spent on the supplies. It went on to say that they were going to write their child's name on "every single thing" so that when one of the other kids used it they would "know who to thank". Wait. What??

There are children who arrive to school on the first day empty handed, and WELL aware of it, as they watch their classmates waltz in donning new clothes and shoes, a brand new backpack strapped over their shoulders, carrying grocery bags full of supplies that they proudly hand over to the teacher as they walk in the classroom. I'd be willing to bet serious money that the child who quietly sits at her desk on the first day with not one single gluestick to contribute to the pile didn't make that decision on her own. But yes, let's make sure she's even more aware that she is using something that isn't hers by putting our name on everything that is OURS with the expectation of receiving credit for our "generosity". 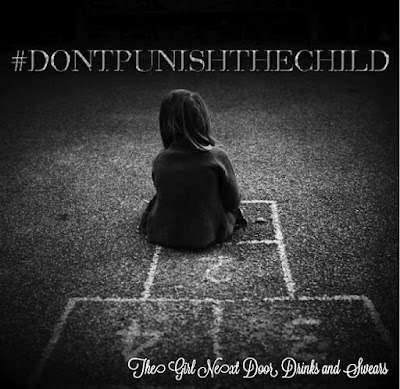 What is this "What's mine is mine" mentality teaching our children, anyway? Is this going to be the line of thinking for future generations? I realize that people who aren't willing to do their part are a drain on society. But why is it so hard for some people to see that IT IS NOT THE FAULT OF THE CHILD. The unfortunate truth is that deadbeats exist and sometimes (all too frequently) they procreate and that poor child did not get a choice in the matter when they were brought into this world!

I should have stopped while I was ahead and not read the comments to that Facebook post. But I'm me, so I did read them, and of course came across something else that enraged me. It said something along the lines of, "Not only do we buy the school supplies those kids need but most of their food as well! Even at home! " Are. you. kidding. me?

While he didn't specifically name the program he was speaking of, I have to assume the "even at home" part he was referring to was food stamps. This issue is a major hot button for a lot of people because "I WORK TOO HARD FOR MY TAX DOLLARS TO BE PAYING FOR SOME ASSHOLE WHO IS TOO LAZY TO GET OFF THE COUCH AND GET A JOB!" Right? We've all heard that rant. We've also all been witness to those people in line ahead of us at the grocery store who fit the cliche of "welfare queen" with their perfectly manicured nails and expensive purse and the latest and greatest smart phone, but then proceed to whip out their government issued food card. I won't lie - that business is annoying. But have you ever seen a woman in line with holes in her shoes holding a toddler dressed in pajamas that were too small and loading up the checkout belt with diapers and milk and baby food? I have. I've actually seen that scenario more frequently than the former but no one seems to want to talk about it because it might make these programs seem legitimate and heaven forbid a single cent of our tax dollars go to people who are less fortunate than ourselves. After all, there are people who are abusing the privilege so we should just get rid of it altogether.

I could write this entire post on pure emotion, but facts are far more effective. So I did some research. It was hard to know where to start so I decided to go with averages. I used non-partisan websites and information so as not to run into biases. I found here that the average american worker pays approximately 31% in income and payroll taxes. That means if you make $50,000/year you would pay approximately $15,500 in taxes (keep in mind these are estimates and don't take things like itemized deductions into consideration). That money gets divided up between different areas of government spending, the biggest chunk being the military (approximately 27 cents per tax dollar). The rest is divided (unequally) among things like healthcare, interest on debt, social security, veterans benefits, food and agriculture, education (a depressingly low percentage), and a few other programs that have a percentage so minimal they aren't worth mentioning.

Food stamps are included in the category of "Food and Agriculture", which is estimated to use 4.3 cents of every tax dollar. That particular category also includes Federal Crop Insurance (which I admit to not knowing much about), so only a portion of that 4.3 cents is actually put toward food stamps. At the end of the article where I found the information I just cited, they offered a link to a calculator that breaks down where your tax dollars are most likely spent. An itemized "receipt" of sorts. Pretty cool, eh? So, I clicked on it, entered in the $15,500 that I've used as an example here and found that approximately $463.63 of those annual tax dollars would go towards the food stamp program. That is roughly $1.27 per day. In my opinion, that seems like a very small amount to give in exchange for knowing a child might get a hot meal a few nights a week, but I'm betting there's still a lot of moaning going on right now in regards to that number. So let's take a minute to further examine it.

According to this article, as of September 2014 there were approximately 22.7 million households receiving food stamps. Divide the $463.63 we established earlier by that number of households. That comes out to .00002 cents. So, in paying $15,500 in taxes, you are contributing…well, not even close to one whole cent per household on food stamps. Still pissed?  How many times have you left a penny in the "extra change" bowl at the convenient store? Thrown one in a fountain and made a wish? Or how about dropped one and just left it on the ground?

Still not convinced? Okay. Let's say you go out to dinner at a mid-priced restaurant once a month and spend $8 on your meal. We'll assume you don't lick the plate clean and leave a bite of your burger and some fries - approximately 10% of your meal - on the plate. If you take the 80 cents that you didn't eat and divide it by the 365 days in the year, you've just figured out that you've donated more per day to the dumpster behind your favorite eatery than you contributed per family on food stamps.

I get that people work hard for a living and that there are lazy, no-gooders who do nothing more than sit around and wait for handouts. But as much as we complain about having to pick up the slack for those who give the less fortunate a bad name, there are people - LOTS of people - who are honestly down on their luck and could use a helping hand. So say what you will about welfare and food stamps and the "lazy" people who use them. There are and always will be flaws and loopholes in the system that allow dishonest people to take what they don't deserve. It's just the way of things and, yeah, it sucks. You can be pissed off about the fact that you have to buy more school supplies than you should because some other kid's parents wouldn't (or couldn't), and you can get your panties in a twist because you have to pay the government a couple of dollars a day to feed some other family that isn't your "responsibility". But I'm personally pretty freakin' proud to live in a country who has programs put in place to help people who need it - ESPECIALLY CHILDREN…even if those programs aren't perfect.