What I Was Doing While I Wasn't On Facebook

I'm not saying that I have an addictive personality. I'm just saying I should never try heroin probably. Not that I have been considering it…I'm just saying it's a bad idea for people who have a tendency to get hooked on things. It's actually a really bad idea in general, but especially for those people.

If you follow followed me on Facebook, you've probably noticed that I've been absent for 2 weeks now. Or maybe I'm giving myself too much credit and you haven't noticed my absence at all. Probably the second one but for my ego's sake we'll go ahead and pretend that the countless hours I spent logged on to faceplace over the years actually meant something and that everyone is missing me terribly.

I was totally addicted to the thing. What's weird is that I really haven't had much trouble living without it. The ease of it has been kind of shocking, actually.

Here are just a few of the things I've done to fill my time.

I helped my daughter bury my son in sand on the beach. I watched my teenager revel in the tranquility of kite-flying. 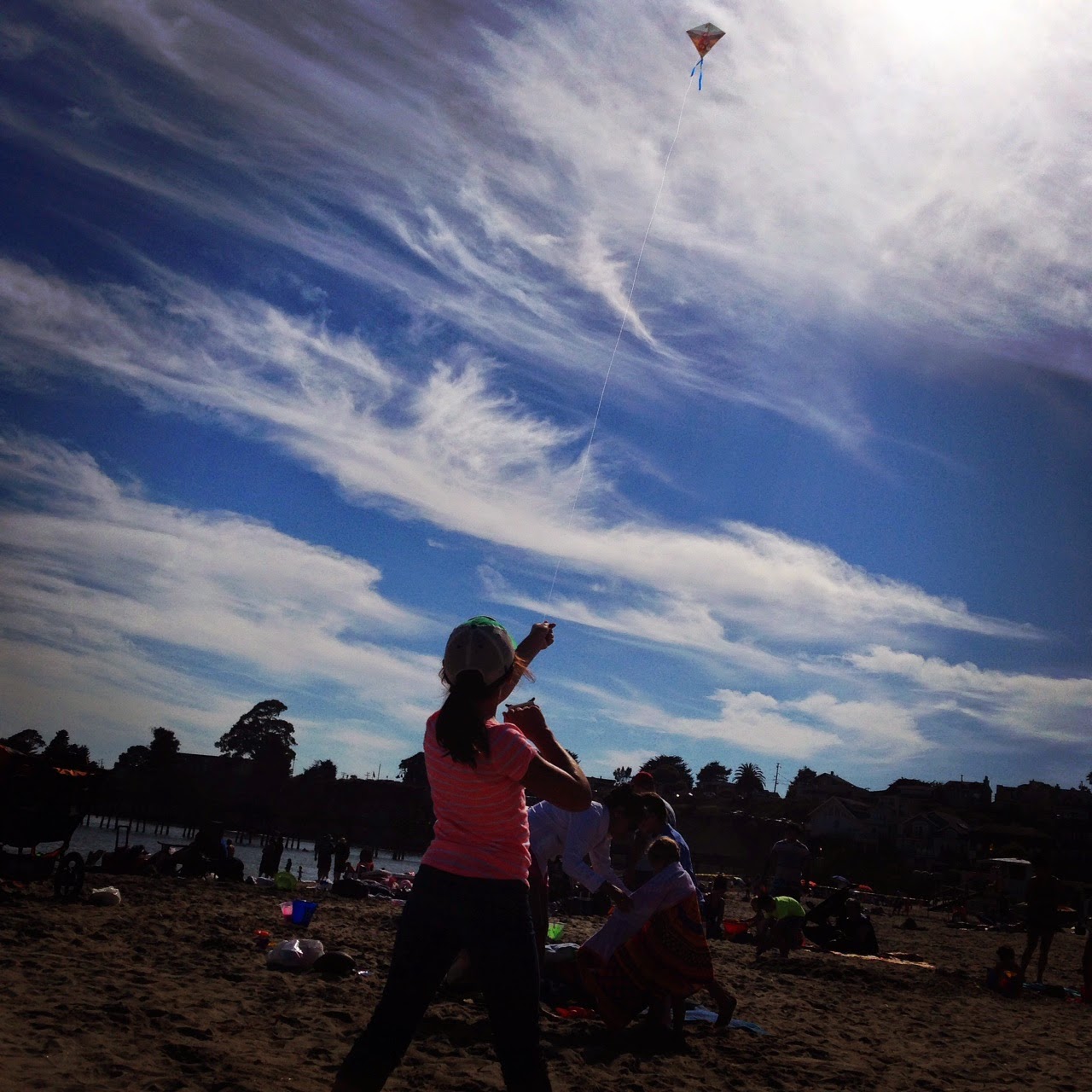 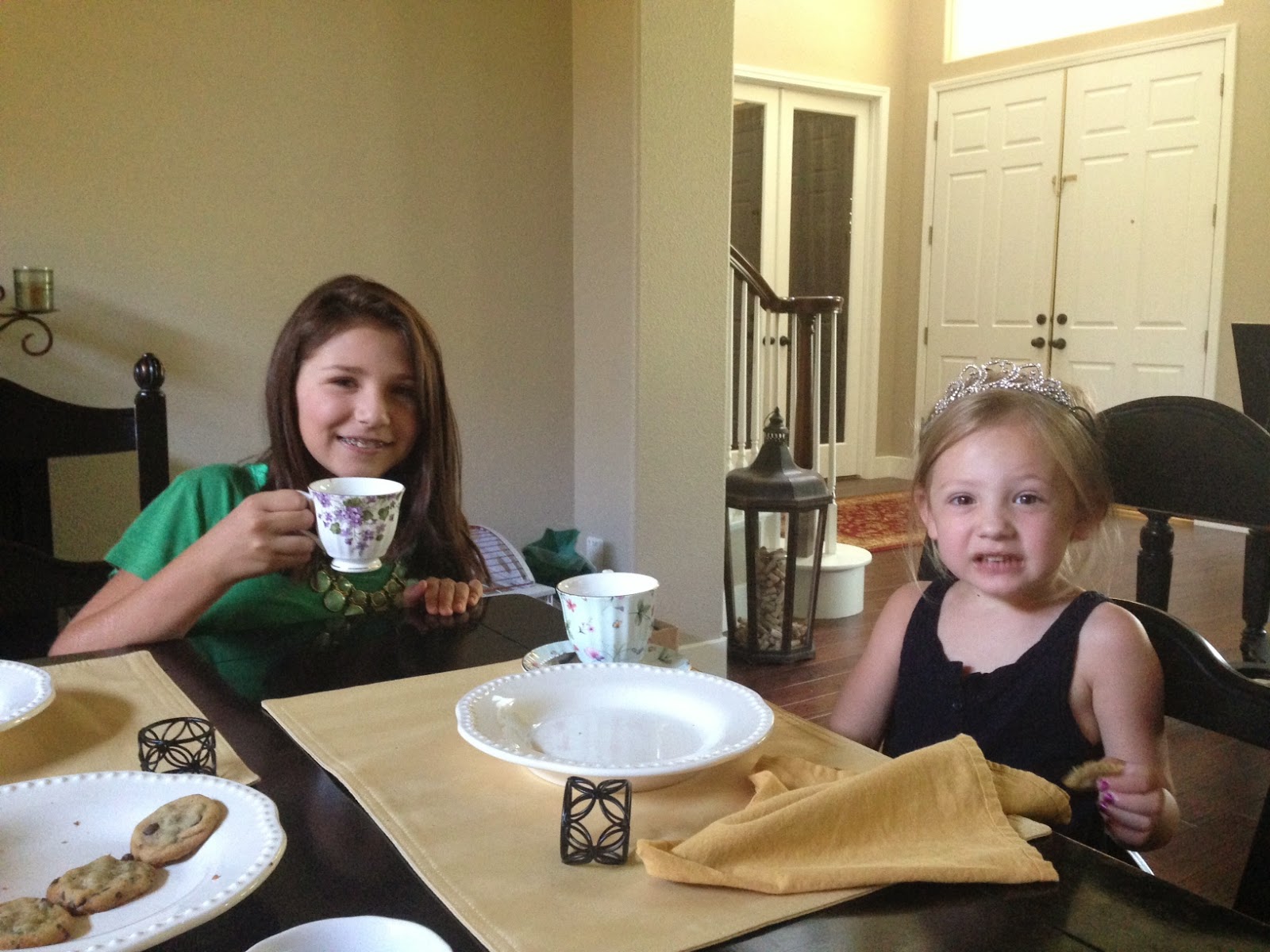 I finished season 2 of 'Orange Is The New Black'. Whoa. Just whoa. Also? Don't judge me. 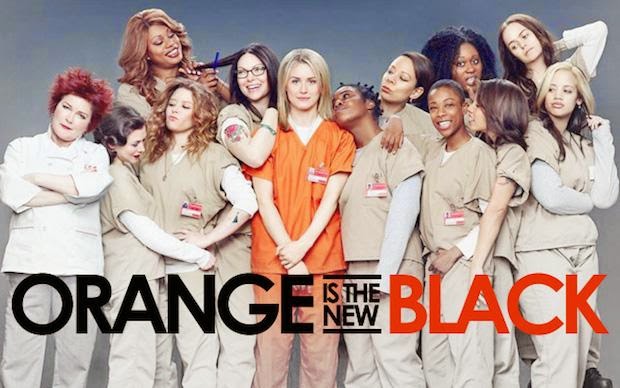 My daughter and I had a movie night at home. Those are the best kind, really. 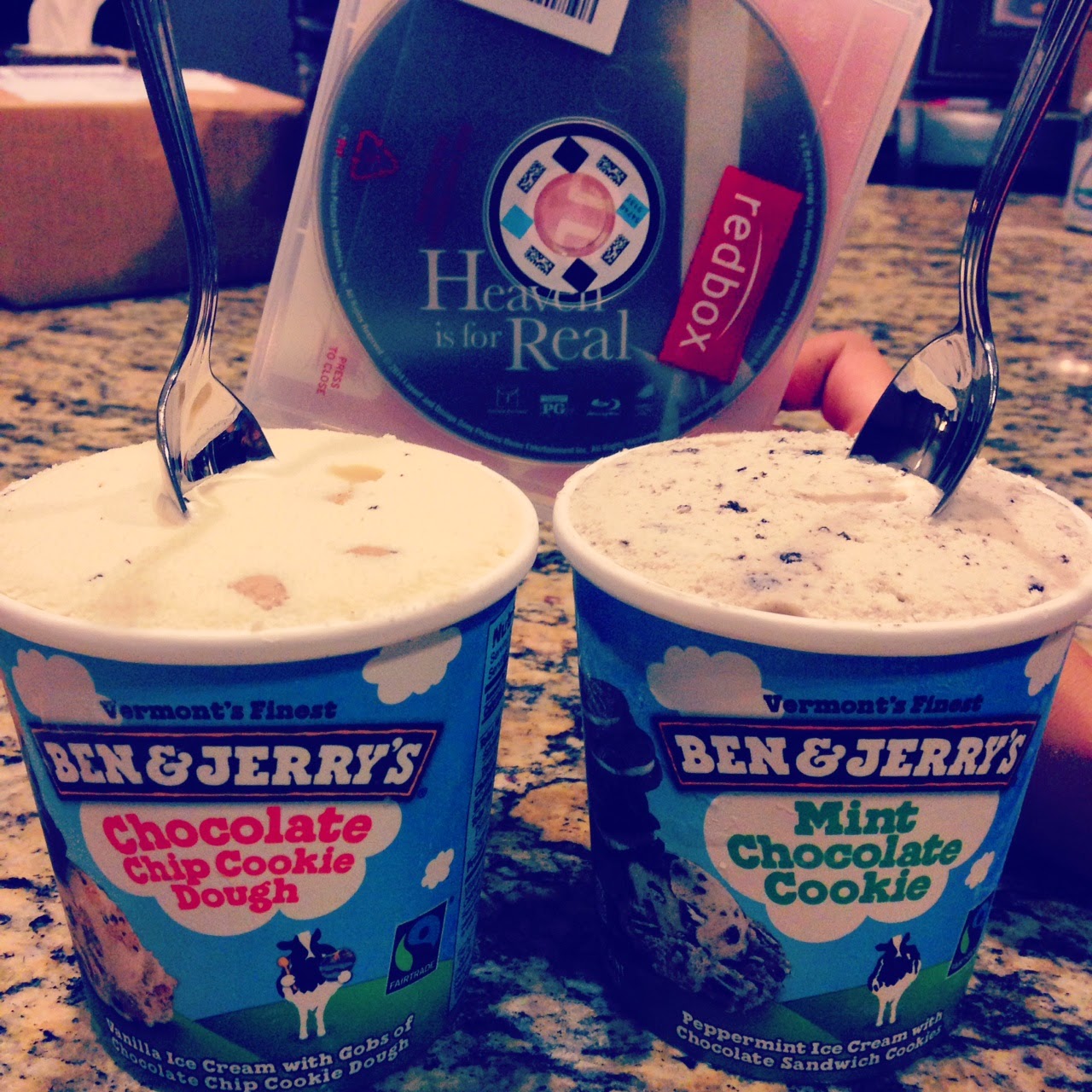 I started and finished two books.

I'm  still on the fence about how I feel about The Giver. I had a hard time getting past it's weirdness and I'm lukewarm on the ending. It does make you think, though, and I like books that do that. It's being made into a movie, which should be interesting since the book isn't very long. And also it is weird. Did I already mention that?

There just aren't enough words to sum up Etched in Sand by Regina Calcaterra. It is heartbreaking, it is triumphant, and it is a true story. She gives a new meaning to the word "perseverance". I cringed and I cried and I cheered. And then I did all those things again. This book has the potential to be life-changing once I figure out the best way to turn my feelings into actions. I finished it several days ago and I still think about it all the time.


I gathered a bunch of tools and hung this laundry room shelf ALL BY MYSELF after tiring of asking my husband forty-seven thousand times to do it. Four months (seriously - I bought the thing at the beginning of April) is apparently how long it takes to wait me out by saying "I'll do it before I go to bed on Sunday." Lies! Four months that he's fed me that line on Saturday morning and four months I've gone to bed Sunday night and managed to not smother him with a pillow because I still had a shelf-less laundry room wall. Anyway. I used a drill and a level and wall anchors and everything and, yeah,  I totally feel like hot shit right about now. 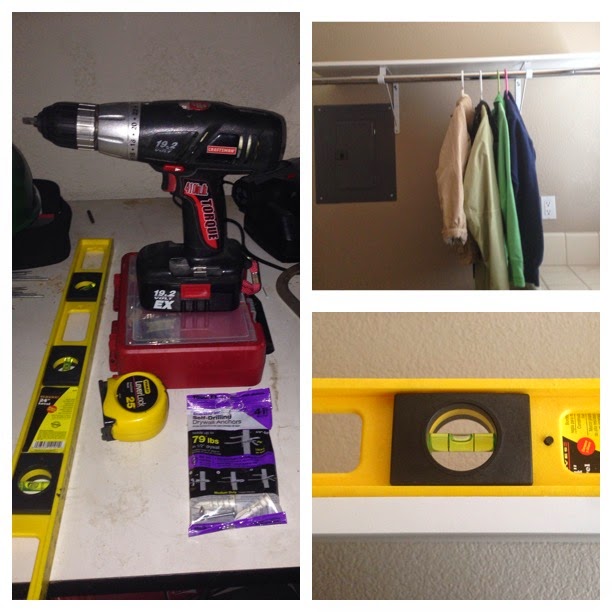 This is the text exchange between us when I sent him the picture of my handiwork. My intention was for him to feel very sad that he never got around to hanging his wife's shelf. I think his feelings are better described as victorious. What an ass. 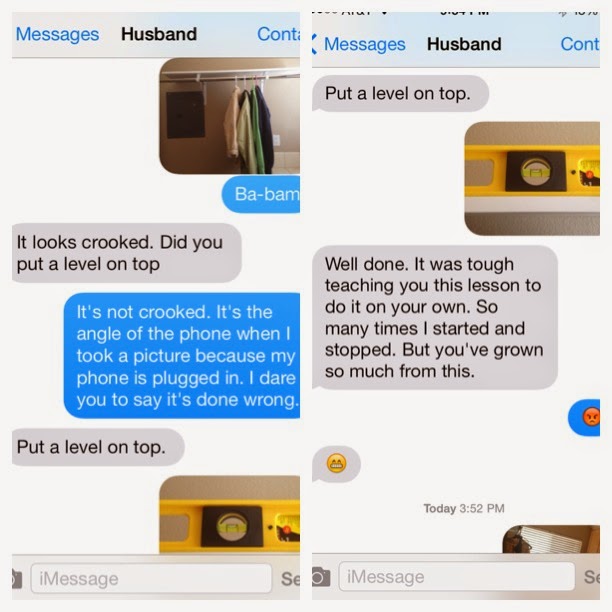 So, do I miss Facebook? Hells yeah. Reality TV is successful for a reason. Other people's lives are interesting, yo. Facebook allowed me to keep up with what everyone was doing, and now I kind of feel like I live in cave. A cave with plumbing and wi-fi, but still. And while I feel a little LOT out of the loop on what's going on in everyone else's lives, I've been 100% focused on what's going on in mine. And I kind of dig it.


P.P.S. Now that I'm not on Facebook, my reach is really limited for sharing that I've published a new blog post. So, if you like what you read, and you ARE on Facebook it'd be super cool if YOU shared it with your friends.

I'm not announcing this as an attempt to get desperate, ego-stroking responses.
"Oh, no!"
"We'll miss you too much!"
"Please don't go!"
"Whyyyyy are you doing this to me?" (What? Too much?)

You've seen those status updates and know what I'm talking about. I mean, don't get me wrong, I hope at least a few of you will miss me.

Okay, okay. Go ahead and tell me how much if it will make you feel better.

But, in all seriousness...let's be honest here.

I DO, however, feel I at least owe you an explanation in the event that it occurs to you 6 months from now that I haven't posted in a while. So, here it is...

When school starts back in the "fall" (we start in mid-August),  my daughter will be in the 8th grade. She is 13. She got her first cell phone about a year ago when she started junior high so she could get in touch with me regarding after school meetings, volleyball practice, etc. It was a simple phone - one she could text and call with - no bells and whistles. Well, that thing is hanging on by a thread. Sometimes it rings. Sometimes it doesn't. Sometimes texts go through. Sometimes they don't. Real useful is what I'm saying.

As I was looking at my account online the other day, I noticed that she is eligible for an upgrade.  I remember saying to my husband (in the not-so-distant past), "It's just silly for her to have such a thing. She does NOT need an iPhone." Well, I apparently like how my words taste, because I eat them frequently (too bad those aren't the only things I eat! Badum bum.) Anyway. I still don't believe she needs an iPhone, but I feel better knowing that she has a way to get in touch with me when I'm not with her and I think it might solve some of the problems we currently have…like her ability to actually use the thing. Plus with my upgrade I can get one for a buck. ONE DOLLAH, people.

My biggest problem with the whole smart phone thing is that I don't want her spending all of her time on it. But as I have considered this new purchase over the past couple of days, it has occurred to me that such an expectation of her turns me into something. Something awful. Something most of us detest. That's right. It turns me into a hypocrite.

All of the time.

To be fair, it's not the fault of Facebook. It's a fault of mine.

This realization has made me think back to what my days were like before I joined Facebook. Not that I never wasted any time…I mean come onnnnnn, there was still laundry to be avoided way back in the olden days. But I was immeasurably more productive than I am now and, more importantly, I wasn't constantly distracted.

This isn't the first time I've said that I'm terrified of what the future of technology holds for my children. I certainly don't like what it's done to me and I believe we've only scratched the surface. The simple truth is that I have become a horrible example to my children and I HAVE. TO. FIX. IT. 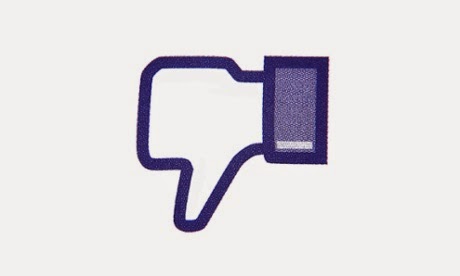 I think I've still got time to turn this thing around. I think there's still an opportunity to show my kids that it IS possible to live without my/their/our faces in my/their/our phones (or computers or iPads). That they can take pictures for their own benefit. That they can, in fact, communicate with people IN REAL LIFE. That a television can suffice as the ONLY means of technology for the span of 30 minutes - or even longer!

As a parent, I am constantly being told of how these days slip through our fingers. How one day they are newborns and the next they are leaving the nest. When I think about the fact that my daughter will head to college in just 5 short years (someone make me a drink, please), I realize what a truth that is.

And I don't want to spend that time with my eyes pointed down.

**I plan to keep writing! Since I won't be using Facebook as a means to advertise new blog posts, please click HERE to get email notifications. NO SPAM! I PROMISE!**