How does that saying go? The best laid plans of mice and men often turn to shit in a hurry? Or something like that?

My husband took off Christmas Eve through the rest of last week. I was really excited because convincing that man to take time off work is like pulling teeth. Except less gross. We made no plans but to hang out in our jammies, play with the kids, relax, drink wine, and watch a bunch of episodes of Breaking Bad. A glorious little staycation is what we were looking at.

By Friday morning I started to get restless. I refused to spend the next 3 days with each of us face down in our respective iWhatevers. We live practically in the dead center of California, which means we are 90 miles from the ocean, and 90 miles from the mountains. I wasn't in the mood for skiing so I suggested we head the other direction and take in the salty sea air. I made the executive decision that we would get up early Saturday morning, drive over to Monterey, spend the day riding bikes along the Monterey Coastal Trail, and have a nice dinner. I even made reservations for us to spend the night so we wouldn't be faced with an exhausting late-night drive home after our family day of fun. Everyone was on board and excited.

Saturday morning I bolted out of bed. What time was it? It was too bright outside. We overslept. I shoved husband out of bed then ran to each of the kids' rooms to wake them up. "Everyone up! Family day of fun! We're late! We need to get a move on!"

Everyone, save myself, was moving at a snail's pace. Very out of character for me, I might add. Somehow we still managed to get out the door only half an hour later than planned, which was nothing short of a miracle. We promised the kids we would stop at our favorite breakfast place in town, so that was our first stop.

Our plan was to eat a big breakfast and have an afternoon snack so we wouldn't have to get off the trail to have lunch. The waitress brought our food to the table and we each dug in. Well, all of us except the 8 year-old. Apparently he had been served a heaping plate of poison disguised as sausage and biscuits. At least that's what you would assume given his reaction. He is currently going through a phase not unlike the kid brother in the movie "Christmas Story". Except instead of taking the perky "Show mommy how the piggies eat!" approach, I tend to go with more of a "eat it or starve" mean frowny face strategy.

So there we sit, 3 empty plates, one untouched. Husband goes bananas regarding the 8 year-old, who is sitting next to me.

"Why aren't you MAKING him eat?"

"Excuuuuse me?? Am I supposed to SHOVE it down his throat? I told him he was going to be really hungry if he didn't eat because it was going to be a long time until lunch. That's about all I can do."

"Are you kidding me? We ARE going! This is our family day of fun, dammit! Everyone shut up and get in the car."

So we pile out of the restaurant and back into the car. No one speaks for at least  an hour.

We arrive at our destination and get everything unloaded. We hit the trail. Five minutes into the bike ride I realize I am missing my watch.

"WHERE'S MY WATCH I LOST MY WATCH OH NO I HAVE TO GO BACK AND FIND MY WAAAAAAATTTTTCHHHH!!!!"

"Jesus. Seriously? You lost your watch? Stay here with the kids. I'll go back."

Husband goes back to look for my watch while the kids and I waited. Fortunately he found it and quickly returned. Crisis averted.

Things smoothed out. We had a nice bike ride, we took a walk along the wharf, stopped at a little eatery for a snack and a couple of beers, and I even got a picture or two that were good enough for Facebook documentation of our "perfect" family day of fun. Which is all that really matters, right? (That's called sarcasm.) 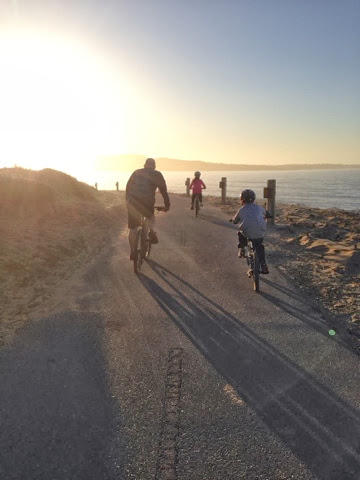 I booked a mid-priced hotel. Nothing fancy, yet nice enough that I wasn't too concerned that we might be murdered in our sleep. Besides the usual ridiculous complaints about water pressure or the front desk not answering the phone halfway through the first ring, it got mostly decent reviews. I do find it weird, though, that no one mentioned the place was constructed of cardboard.

Husband and I were awoken pre-light by the sounds of the people across the hall getting ready for the day. I feel certain that they either set up camp right outside our door, or were actually using the hair dryer in OUR bathroom. A child screamed bloody murder for no less than 10 minutes. He was never reprimanded or taken elsewhere, so I can only assume they were in the hallway removing each of his appendages with a butter knife. I guess I'll never know because I was too tired to get up and check.

Husband turned to me and asked, "Is there an obnoxious family standing right next to our bed? I can't see them but they HAVE to be there. Wait. Are they IN the bed with us?"

I was taught not to curse violently at children or strangers, which was the only thing keeping me from sticking my head out the door and shouting, "ARE YOU FUCKING KIDDING ME RIGHT NOW?" And that would have been the clean version.

We were awake much earlier than planned, so we decided to just get up and head home. We got donuts and coffee on the way out of town. The kids fell back asleep and husband and I got to talk for quite a while without being interrupted. We even pulled over at a winery and did a little wine tasting at 10 in the morning. Well, not the kids. Obviously.

Perfect little family day of fun, if I do say so myself.