I'm tired of feeling like the world is full of terrible people doing terrible things.

There seems to be an endless supply of news stories about crime or mass shootings or war or other equally depressing happenings times infinity.

If I let myself think about about it too hard or too long, I kind of want to flee the planet. They don't have these problems in space probably.

But then I see or hear or read something wonderful and my heart gets happy and I feel better about living among all the other humans.

My husband was texting me from a cross-country flight because TECHNOLOGY IS AMAZING. He was bored and giving me a play-by-play of the on-board happenings. He was seated near two women, each traveling with young children. He's never bothered by sitting near kids because he has them, too. But that's not the case with every passenger and if you've ever traveled with young children, you know that airplanes can be a place where the assholiest of assholes band together to hate those of us who bring them with us on public transportation.

At one point the flight got pretty turbulent. My husband said it wasn't just a little bumpy...the plane was actually rocking. The little girl puked. The seatbelt sign was on, so her Mom couldn't get up to help her. The men - strangers, might I remind you - THEY CLEANED UP THE LITTLE GIRL'S PUKE, YOU GUYS.

The other mother seated nearby had been working tirelessly to console her crying baby. When the seatbelt sign went off allowing passengers to get up, another woman sitting near the mother (they didn't know each other) asked if she could help with the baby. She then proceeded to rock and dance in the aisle with her until she went to sleep.

As I was reading these texts, I'm ashamed to admit that I kind of found myself in shock and awe. Not because I don't think people are capable of doing nice things, but because so rarely are they the ones that make headlines. The world's negativity has jaded me.

We are so quick to point out when people do things wrong. I know I'm guilty. But, I've come to a turning point over the past couple of months. I can't pinpoint the catalyst, but something has happened that's made me aware that I'm not doing my part to make this world a better place. Simply existing as a non-criminal member of society is just not doing it for me. I feel like I am capable of so much more.

Let's start small, shall we?

Before he signed off as the plane was about to land he said, "These are good people. If I had some 'Good Human' coupons, I'd give them to some of the people on this plane."

I laughed for a second and then I was like...WHOA. That is a genius idea (although I really have to be careful about telling him things like that - you know, because of the head-swelling and all).

Have you seen those "You suck at parking" cards? They're really a thing. You can actually buy them. There are lots of options, but this one was the least rude I could find. Really. 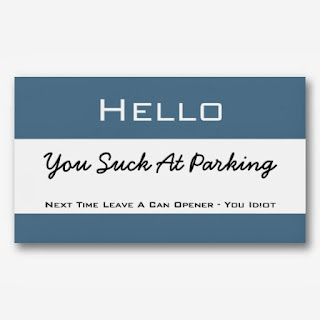 I'll admit to thinking these are funny. Because, really? Is it that difficult?

Most people -ahem - wouldn't think twice about sticking one of those babies under a deserving someone's wiper. Amirite?

So why don't we commend people for doing nice things when we see them happen? I think that sucks of us. Wait. I shouldn't assume you're guilty. It sucks of ME. Boooooo, ME! Big fat thumbs down for ME. The good news is...it's never too late to pick up a good habit. It might feel awkward at first, but I'm going to fight through it. I AM GOING TO FIGHT THROUGH IT. You will never regret making someone feel like they matter. I believe this.

Here is my proposal. Remember the "Good Human" coupons my husband mentioned? Well, I googled it and can you believe I came up short? Nothing. Nada. Maybe I didn't look hard enough, but the only ones I did find were sarcastic. Shocking. So, I made some. I'm going to carry them with me. I'm going to give them to my kids to carry around, too. And we are going to hand them out. 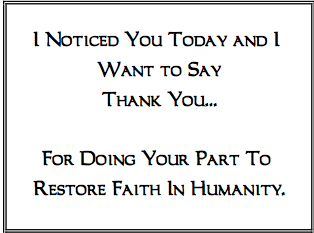 I hope the outcome will be 3-fold.
1. A "Good Human", as my husband coined them, will be recognized for doing a good thing.
2. The "Good Human", in turn, will be encouraged to do more good things.
3. When carrying these cards, we will constantly be on the lookout for other "Good Humans" which will inadvertently turn our focus away from the negative. Yay!

I invite you to join me. Feel free to print your own sheet of cards here.

**I don't ask this often, but if you can get on board with this, or have friends that might, please share it. There is no monetary benefit to me (it could actually end up costing me money) - all I'll get is that feel good feeling of making a difference. **