10 Things I Hate About You: An Ode to My Husband on Our Anniversary

Today is our 16th wedding anniversary. What? That's right. SIXTEEN years. I know what you're thinking. You've seen my picture and I look entirely too young to celebrate such an occasion. You're really too kind.

To celebrate these many years of wedded bliss, I decided to dedicate today's post to Charming. He won't read it, of course, but that's okay (I guess). Because I've titled my ode as follows: 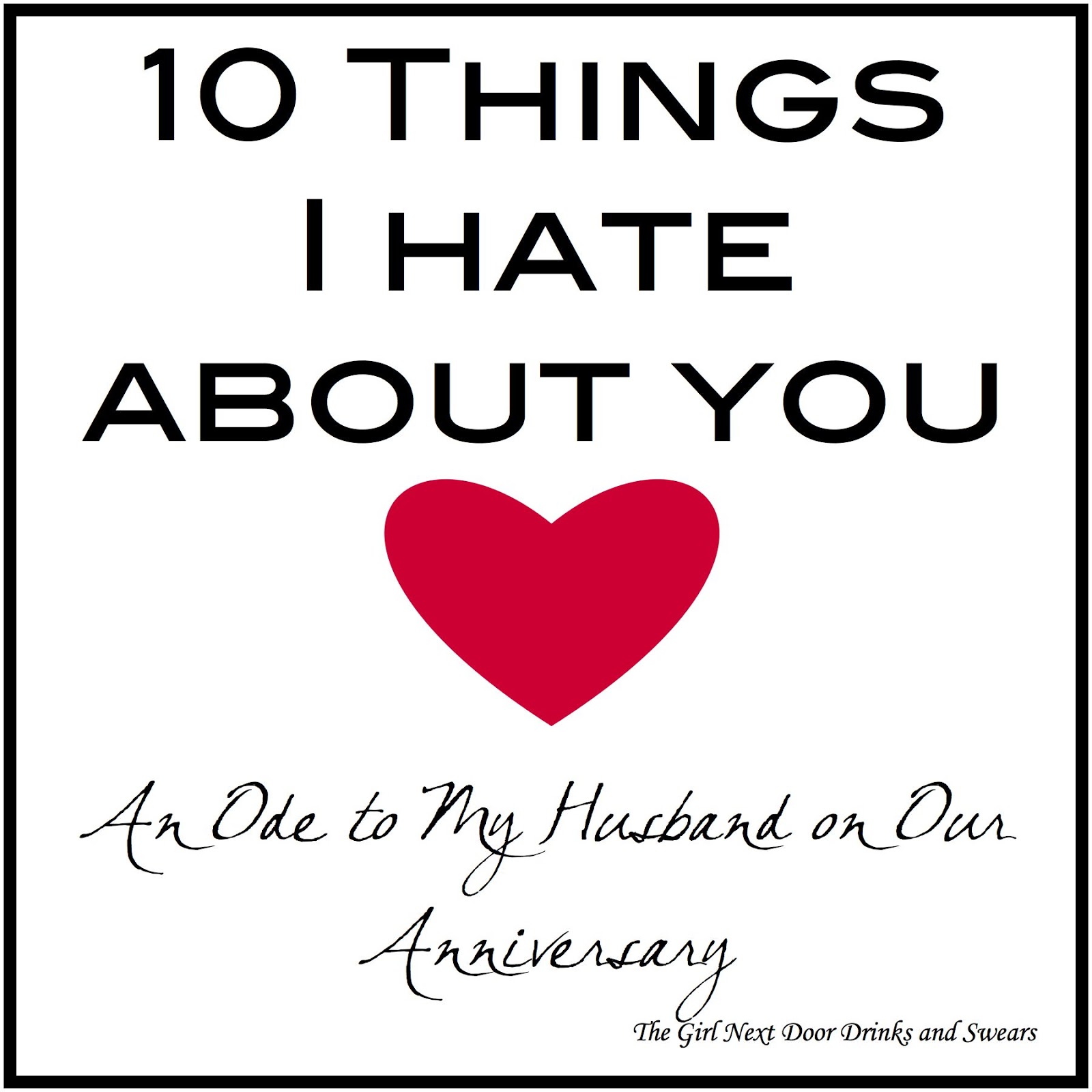 Seriously. Just go with it.

Today we celebrate 16 years together. Neither of us are in prison for attempted murder, which is cool. HOWEVER, I feel like now is as good a time as any to bring some things to your attention that really bug me about you.

1. You are a lying liar who lies. You have always answered "no" when I've asked "Does this make me look fat?" or "Do I look ugly today?" Every. Single. Time. Come on, buddy. Everybody knows at some point in the last 16 years that shit wasn't true.

2. You force our children to play favorites. Do you ALWAYS have to be the fun one? The Nerf gun wars you randomly initiate in the living room and goofy guessing games you agree to play on road trips are starting to make me look like a dud and it's pissing me off. Because I'm totally kick-ass.

3. You say "I'm sorry" way too soon after you've screwed up. Not typical for most husbands, and I'm not sure when this started because it hasn't always been the case. Do you know how hard it is to stay mad and talk shit about you to my friends when you do that? Also it makes me feel bad that it takes me like...oh I dunno...24 hours to apologize. I mean, hypothetically speaking. I just assume it would take me that long if I were ever the one who was wrong. I guess we'll just have to wait and see. 16 years down, but it's bound to happen sooner or later.

4. You don't remember ANYTHING I say. Seriously. I can recall every conversation (argument) we've had word-for-word for the last 7 years and make it relevant in any given current conversation (argument) by bringing it back up, regardless of the subject of either conversation (argument). You usually have no recollection of what I'm talking about and it makes me feel like a crazy person or something. Nevermind that I'm not fighting fair and you are. You should take some gingko biloba or whatever that stuff is called that's supposed to improve memory. Look into it.

5. You are entirely too observant. Husbands aren't supposed to notice things like painted toenails and new hairdo's. Makes it really hard to hide the fact that I've spent an obscene amount of money on things that are going to chip off or grow out in a matter of weeks. Stop it.

6. You are forcing the issue with the "who's funnier" debate. If you'd stop saying things that make me laugh until I can't breathe, we could settle this once and for all. That's annoying. And I'm funnier.

7. You are forcing the issue with the "who's smarter" debate. If you'd stop being so good at ALL OF THE THINGS, we could settle this once and for all. That's annoying. And I'm smarter.

8. You should be more budget conscious. When I ask for things I don't need, like new purses or shoes, the typical husband response is supposed to be, "You have too many purses and shoes already!" Not "Whatever. You should get it." What the hell? I feel like this is some kind of tit-for-tat strategy. Anyway. While it makes you out to be a super cool husband, it probably makes the other husbands look bad and it makes it really hard for me to be financially responsible. Think about others for once, why dontcha.

9. You shouldn't give me credit for being mature or responsible enough to make wise decisions all by myself. That's actually irresponsible on your part. See #8 above.

10. You always make me pick where we go out to eat. If I say "I don't care," I really do mean that I DON'T CARE. Just pick. And for hells sake, if I pick somewhere and you shoot it down, expect me to lose it. Because seriously? I'm being for real on this one. Knock that shit off. If we ever divorce, I swear it will be over whether we have pizza or burgers on Friday night.

So, in summary, thanks for being the man you are. A man who is funny, smart, considerate of my feelings, recognizes when he's done wrong, notices when I try to look nice, and is the best dad a kid could ever dream of having. If husbands were a lottery, I won the Powerball.

*Bonus #11.* I made you this really nice tribute and you will never even see it because you refuse to read my blog. It wouldn't kill you, ya know. Asshole.