It's Right There...Front and Center

Our country has seen its fair share of tragedy in the past year. It's been a lot to deal with.  Too much, in fact.

Some days it is hard to convince myself that I shouldn't pack up our family and go live in a cave. Remove us from society. Pretend that evil doesn't exist.

It is easy to feel like humankind has entered a perpetual spiral down a pit of despair. But you know what? The fight between good and evil has existed since the dawn of time. The media just wasn't there to capture and share the news with such immediacy.

I sat watching the Today show this morning as they discussed the week's tragedies and showed video footage of the horrific scenes. At first I could think only of how depressing and broken the world felt. In light of recent events, it's hard not to feel that way. But as I continued to watch and listen, I began to see something that wasn't depressing or broken at all.

Onlookers flocked to an area where bombs went off only minutes before. To render aid. Marathoners continued to run to area hospitals to give blood. To save lives. People opened their homes to displaced citizens, offering whatever they could to help complete strangers. To show compassion.

What was I seeing?  Bravery. Unity. Selflessness. I was seeing love.

We will always grieve when faced with the unimaginable. We will mourn the lives lost and will question the reasons why. We will be heartbroken. We will feel afraid. And we may even begin to feel hopeless. The day of the bombing in Boston a quote by Mr. Rogers began quickly circulating around Facebook. A line of it said, "Look for the helpers." Yes. When we find ourselves feeling hopeless and afraid, we have to try - as hard as it may be - try to see the good. Try to see the helpers. Try to see the heroes. Try to see the hope. It's easy when you know where to look.

Because it's right out in front. 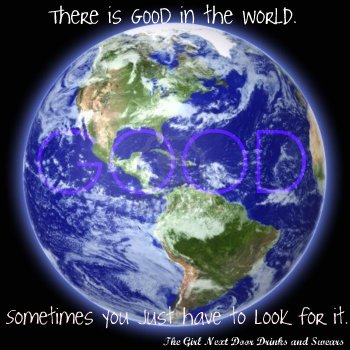