Down With the Assholes.

I'm sick of assholes, you guys.

Check this out. My Mom is here visiting and she offered to keep the kids so Charming and I could go out without having them all up in our grill. And we did not turn down that opportunity because we are not stupid people. There's a new outlet mall about an hour away and we decided it would be a great time to check it out since we wouldn't have to listen to our little people bitch about their legs falling off the entire time. Plus I love a good bargain. And also Wetzel's Pretzels.

We drive up and notice that there is that yellow police caution tape around one of the stores so I'm all, "Great. Somebody got murdered up in the Nike outlet over some pumped-up kicks and now this whole operation is shot to hell."

We walked up to the mall entrance and found out that someone called in bomb threats to the Ralph Lauren and Love Culture stores. Of course they did. Because everybody knows nothing says "I mean business" like threatening to blow up a bunch of preps and trendy 20-somethings. Good. Lord. So, of course, the cops have to come in with all their gear and bomb-sniffing dogs and whatnot and close down all the stores because they have to take bomb threats seriously. Because explosions can be dangerous. But everyone knew that it was just some asshole being...well, an asshole...because he (or she) knew that it would wreak havoc on people's day. But rather than creating mass chaos with people screaming and running for their lives, everybody was just standing in line outside the Coach store being really pissed that they were missing out on the 50% off everything (everything, y'all!) sale. And I was pissed because I wanted my very own cup of pretzel bites that I wasn't even going to have to share with the little vultures I usually carry along with me (or at least a hot Nestle Tollhouse cookie), and I didn't get either.

You know, it takes a conscious effort to be an asshole. I imagine it must be exhausting. Waking up every morning having to come up with a plan of whose day they're going to ruin. I mean, I have a hard enough time remembering what day it is and which kid has which lesson or sports practice after school. If I had to throw in a meniacal plan to destroy humankind, I'd be toast.

What I'm getting at is this: don't be an asshole. I know I'm simplifying it, but seriously. Just don't. It's easier to be nice. You know what? You don't even have to be nice. Just exist. And let other people exist. Chances are most people are doing a pretty good job at making some bad life choices on their own without your help. Do you even realize how much better off the world would be if everyone abided by that one simple rule? Perhaps you're an asshole because someone was an asshole to you. Well, break the cycle. Do it. Put all the effort you use to be an asshole into...oh, I don't know...not being one. 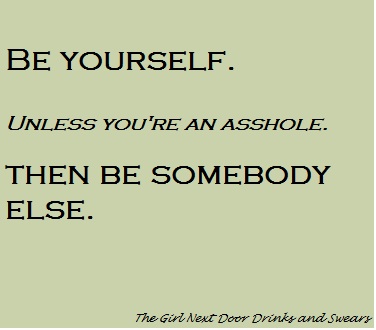 You're NOT an asshole if you click on this banner.
P.S. You can click on it every day. And that makes you even cooler.