I don't write about controversial topics. Mostly because I have a tendency to be a fence-sitter but (if I'm being completely honest) it is also because I don't have zillions of followers and I don't feel like I can afford to lose any that I might offend. Followers are hard to come by in the blogging world, and it's no fun to lose even one. So I usually just keep the strong opinions I do have...to myself.

But not today. There is a hot topic of debate going on right now, about which I'm struggling to keep my mouth shut. (If you're reading this I obviously couldn't help myself and ultimately hit "publish". Yowza. I'm getting ballsy in my old age.) It's true, I'm a little afraid I'll lose followers over it, but at the same time I feel like if you don't want to be my friend because we disagree on an issue, it's probably best that we go ahead and part ways. I feel like writing this is the right thing to do. Partly because it's my right to express my opinion, and also because this particular topic affects people that I care about. In doing so I am showing my support for them.

I think I should start by clarifying that I am a Christian. I go to church. I have a Bible on my nightstand. My family says grace before meals. I pray when I am thankful, or hurting, or confused. I do the same for others. I assume there is a God and a Heaven, but I've never come face to face with either so it is my faith that leads me to believe in both.

What I do not believe is that it is either my job or my place to decide whether or not men can marry men or women can marry women. Neither do I believe that I have the right to cast judgment on them. Those were not things I was ever taught to do. 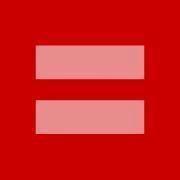 I don't know what it's like to be gay because I'm not gay. But I DO know what it's like to fall in love and want to spend the rest of your life with someone. To raise a family together. To declare your love for one another in front of the people you most care about and have it recognized as legitimate. I can't imagine how frustrating and hurtful it must feel to have that privelege denied.

I have several gay and lesbian friends. They are good people. People who contribute to society and care about others and abide by the law. I know of a lot of heterosexuals who don't do any of those things.

When we lived in Texas, we lived down the street from both a gay couple and a lesbian couple.

The gay couple started our neighborhood watch program. They held picnics in their backyard. They would always set aside a special bag of treats just for Tink on Halloween. When they had yard sales, they would let her pick anything she wanted. They walked their dog in front of our house every evening, and when Tink would run outside to pet her, they waited patiently until she was done. Don't they sound threatening? I don't know how long they were together before we moved in, but we lived in that house for almost 3 years, and we've been gone now for 6. They are still together, so their relationship has withstood at least 9 years. A lot longer than many heterosexual marriages last these days.

The lesbian couple lived two doors down from us. They loved animals and rescued any strays that came their way. They brought us a baby gift when Dimples was born. They are long time residents of my home town and my Mom can't remember a time they weren't together. They are probably in their 60's now. Wouldn't they be a total disgrace to the sanctity of marriage? They've literally shared a life together, but since they can't get married, neither of them will be considered next of kin when something happens to the other. Pretty heartbreaking if you ask me.

I've seen a lot of people throw out biblical references regarding this subject. Yeah, it's talked about in the Bible. That much is true. But if we are really going to bring the Bible into it, let's be fair. The issue is addressed in a handful (literally...it is mentioned less than 10 times) of scriptures. There are, however, a whole slew of passages on "loving thy neighbor as yourself" and not passing judgment on others. It seems that those two things are being overlooked on this issue, does it not?

I'm not writing this because I think I'm going to change anyone's opinion on the matter. Chances are I'm not. But, I suppose a part of me does (naively) hope that people will open their minds to the fact that we are all different. We are all human beings. And we are all imperfect. We should probably keep that in mind when we start down that slippery slope of picking and choosing things out of the Bible for which we are going to deny people rights.

"Live and let live." It's a much easier life motto to abide by.