10 Reasons I'm Proud to be a Texan

If we've been hanging out a while, you've probably picked up on the fact that I'm from Texas. Even if you're new, there's a good chance you've figured it out. Because I mention it as frequently as possible. Because I'm from Texas. And that's what Texans do. We boast about the fact that we're from Texas. As a matter of fact, as I'm typing this, I have a Texas t-shirt on. True story. See there? If I'm not talking about being from Texas, that business is plastered across my boobs.


Texans are a proud people. I am no exception. It is for that reason that I give you... 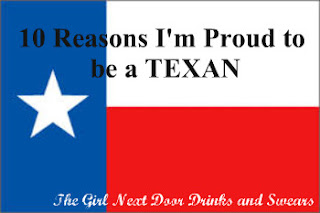 10. Texas is one of the few states where people use the state and its flag as a central theme for their home decor. Even though we haven't lived there in over 6 years, I currently own throw pillows, coasters, dish towels, water glasses, coffee cups, koozies, framed pictures, and a plethora of Christmas ornaments...all adorned with the Texas flag. Do North Dakotan's decorate with their state flag? I think not. (No offense to anyone from North Dakota. I'm sure it's lovely.)

9. It is entirely appropriate to tell your kid to "go get me a beer", even when other people are around. Especially if you are sitting outside around a fire pit and the beer is in a cooler nearby. As a matter of fact, in that instance, "Get Billy one, too."

8. There are more songs that talk about Texas than any other state. Wikipedia even backs me up on this. I looked it up because I'm nothing if not thorough, and it says that the entire "United States doesn't have as many song mentions as Texas, its people, and its parts. The only possible contenders: Jesus and love." Uh huh. That's what I thought. Case in point...finish this line: "The Stars at night are big and bright ____ __ ____ ____ __ ____." Did you clap at the appropriate juncture? You know you did. I believe we can thank 'Pee Wee's Big Adventure' for the reputation of that one.

7. Texas has some crazy ass weather. It really keeps you on your toes. There have been documented cases where it was 70 degrees on a Tuesday and then snowed on Thursday. Snow is big news in the lone star state. Literally. If there is a flurry in the forecast, you can bet your ass it will be classified as "BREAKING NEWS" on the 10 o'clock broadcast. They will announce school closures before a single flake hits the ground. I'm not lyin'. Texas also has tornadoes. Tornadoes are scary, y'all. There are sirens that go off and cops drive around town telling you to take cover. People take that shit seriously - right after they video the twister in their back yard and put it on YouTube.

6. In Texas you only have to collect a wardrobe appropriate for two seasons: "summer" and "not summer", both of which last approximately 6 months, with an occasional "summer" cameo in the "not summer" months. See #7 above.

5. Despite the absurd weather, there are about 3 weeks of the year that people recklessly label  "Spring". It is truly beautiful because the bluebonnets are in bloom. Bluebonnets are the Texas state flower. Do you know your state flower? Pfffft. I learned that shit in Kindergarten. There's a whole story about it. It's called "The Legend of the Bluebonnet." Google it. ANYWAY, bluebonnets pop up all over fields and alongside interstates around late March and early April, and they are breathtaking. It is a rule that if you have children, you must have their picture taken in the bluebonnets at some point in their young lives. Or if you're me (a real over-achiever), you fly in from out of state and have their picture taken in a field of bluebonnets in front of a barn adorned with a Texas flag. I even impress myself sometimes. 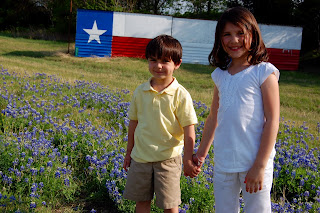 4. Texans know how to properly insult someone. I'm going to teach you how, so listen up. Whenever you want to say something ugly, use a sing-songy voice and either preface or follow up the insult with, "Bless his/her heart." Let's try it, shall we? "That girl is such a bitch. Bless her heeeaaaart." (Drag out the 'heart' real long.) As you can see, it really lightens the blow.

3. Everything is bigger in Texas. No, really. It is. Besides the state itself being positively ginormous, everything it contains is huge. I'm gonna have to use bullet points for this one.
2. Speaking of football. High School football, aka "Friday Night Lights." I think that just about covers that one.

1. Because the people I love are there. I met my husband there. My kids were born there. My roots are there. And no matter where I end up, I'll always be a Texan. It's home.

You don't have to be a Texan to vote for me.