Wax On, Wax Off

We are traveling home to Texas for the holidays, and on my to-do list before we head south was to get my eyebrows waxed. For the bazillionth time this year. (I'm anxiously awaiting notification from Guinness regarding my possible win in the facial hair growth category.) Since I outed myself in my holiday brag letter that I decided to put ON THE INTERNET, I know where all eyes will go the minute everyone back home sees me.  Well have no fear. I got these babies all prettied up for y'all.

But not without pain and embarrassment.

Because I am a fly-by-the-seat-of-my-pants kind of gal, I typically decide to do things like eyebrow waxing, pedicures, haircuts, and all personal grooming errands in general on a whim. I was standing in line at the post office when I caught a glimpse of myself on the security camera.

Oh. Nevermind. That's just me. Anyway. It was then that I realized I was past due. Of course I am. It's been at least 24 hours since my last facial grooming session.

So on my way home I stopped at a local salon that accepts walk-ins. I have been there before and the woman did a good job and she worked fast, so I figured it was a safe bet to go back. The same woman greeted me at the counter and asked what I needed done. I told her an eyebrow wax and signed the register.

"Give me just a few minutes. James! Customer!"

There is a large Assyrian population in this part of the country. I will get it all wrong if I try to explain what Assyrian is because I find the origins a little confusing and out of respect for their culture, I will not butcher such an attempt. The important thing to take note of here is that they are foreign and they have an exotic look about them. Kind of Italian-like. Dark skin and hair with prominent features. Not unattractive.

Here's a run-down of my appearance for this little pit-stop: jeans, green t-shirt, long sweater, second-day hair in ponytail, no make-up, Sasquatch face.

So I'm sitting in the little waiting area looking like that and here comes James all... 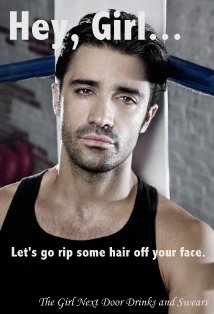 Okay, so he didn't look exactly like that. But there was a resemblance, okay?

Uh-huh. In no way is this going to be embarrassing.

So we go over to the stylist's chair and he's all up in my grill checking out my unruly brows and I'm wondering what the hell happened and why isn't Mary over there doing this instead of eating her lunch and I'm pretty sure I just saw her look over here and snicker. WTF, Mary?

James wastes no time applying wax and those little strips to what feels like every inch of my face. Only he does them all at the same time instead of one by one. So I'm sitting there with white rectangles stuck all over my face when his friend walks over and starts talking to him. In a foreign language.

You know how you feel when you go get a pedicure and the ladies start talking to each other about your hammer toes or what a bitch you are in a language you can't understand? Yeah. It was kind of like that. Except with guys. So awesome.

FINALLY the friend walks away. James returns to business and strikes up a conversation with me about the Dallas Cowboys (because at some point it came up that I am from Texas). Something about him learning about football when he moved to America and he liked the blue and silver and he liked the star, so he decided that was going to be "his team". Okay. I approve. His English was a little broken, but he can say "Go Cowboys!" quite clearly.

Did I mention the soundtrack of choice playing AT TOP VOLUME in the salon was Celine Dion? So here we are saying "Go Cowboys!" back and forth and discussing Tony Romo's inconsistencies while "All By Myself" is blaring in the background and I've got a mask of wax and fabric covering three quarters of my face. This was one for the memory book, people.

He finally finishes and I RUN to the reception desk to pay so I can get.the.hell.out. I swear Mary is still laughing at me. James saunters over and says, "I do good job? My name James. I here six days."

"Great! See you next time!"

And that is the story of why I have to find a new place to get my eyebrows waxed.

Save me from further embarrassment and click on this, would 'ya?