Our Elf Came From the Dollar Store

I'm starting to feel like everyone is going to a party and I wasn't invited.

You might be saying to yourself, "I wonder why she wasn't invited? She's a little off, but she doesn't seem like that big of a social outcast."

Okay, maybe you're not saying that.

But I'm not talking about a party in the literal sense (to which I'm sure there will be plenty that I am not invited). I'm talking about this little Elf on the Shelf phenomenon. We don't have one. Never have. *GASP* say all the mothers who actually love their children.

I did a little background check, and it turns out the elf was born the same year Dimples was...2005. Tink was four. I guess I was too busy dealing with mom-brain-malfunction (still am, ssshh don't tell) and didn't notice this new fad. Because that is like THE prime time to sneak one of those little punks into your house to scare the bejeezus out of your kids about Santa not coming if they don't get their asses in line.

I didn't even know it existed until last year when "People I want to Punch in the Throat's" blog post about it went viral. I seriously hope she gets some kind of royalty from that company because I can tell you she has got to be responsible for at least 70% of their sales. Even if people only bought one to take pictures of it doing stupid shit to post on the internets. A sell is a sell.

Anyway, from what I can tell, it seems that you're either a lover or a hater regarding the creepy little thing. I can say I'm pretty much indifferent (except for the fact that so far I've referred to it as a "punk" and "creepy". Oops.). But honestly, we don't have one so how can I offer up a valid opinion? I can tell you that if we did have one, I would fail miserably at remembering to move it or making it look like it's been up to some crazy shenanigans or whatever it is you're supposed to do to effectively scare your kids into angelic behavior. Since we don't have one I have not had the briefing on maximizing elf effectiveness.

I've never felt like I've missed much by skipping out (albeit unintentionally) on the elf. Until now. Christmas is right around the corner and all the little boys and girls are supposed to be on their best behavior in hopes they will witness a  Christmas miracle and BAM an in-ground swimming pool (for example) will appear in your yard overnight. Thanks a lot, Hallmark Channel. My kids are usually pretty well-behaved all year long, so I rarely have a reason to break out "Santa's not gonna stop at our house" threats. But for whatever reason, they have decided to up their game and go all rogue on me right here during the final hour.

It's not stuff that really little kids do like throw tantrums in the grocery store or refuse to take their afternoon nap. It's annoying elementary-school age stuff like shooting each other with Nerf guns at point blank range until the other one screams, or having to be told 87 times to brush their teeth, or fighting over who gets which peanut butter cup out of the Advent calendar (which are exactly the same by the way). I've especially enjoyed their newest game of suddenly and unexpectedly screaming at the top of their lungs while we are in the car and sending me into cardiac arrest as I am sure I missed a turn and we are about to go hurling over a bridge into the San Francisco Bay. Or something as equally terrifying.

I need some leverage.

It got me to thinking...maybe I should get our family one of those elf things. Surely I could manage to pull off at least a couple of convincing maneuvers between now and Christmas Eve. My kids are pretty gullible. And easily creeped out. Perfect recipe for one of those things to work in my favor.

So I looked them up online to see where I could find one and...WHAT??? Twenty-nine ninety-five? I am cheap. CHEAP. Like hell I'm going to spend thirty bucks on a toy that makes an appearance one month a year, not to mention I'm pretty sure after this year Tink's done buyin' what we're sellin' when it comes to the whole Santa gig.

I do some brainstorming. And I have an idea. I dig through the bin of "Christmas decor that didn't make the cut because it's stupid and/or ugly but it's a keepsake so I can't toss it" and I found an elf(ish) thing that I can use in lieu of said elf. I bought it a couple of years ago at the Dollar Tree. I love the Dollar Tree. Did you know that EVERYTHING in that store really IS just a dollar? Ah-May-Zing. I hate when I go to "dollar" stores and the price tag says $3 or $5 and sometimes even $10. What the hell? This is a DOLLAR store. Not plural. Shit. I got off-topic.

Anyway, I found this ELF (close enough) that I'm going to set out and try to remember to move around at least a few times this holiday season. Maybe I'll snap a picture or two and share it with you guys. I think it might be juuust creepy enough to scare them straight. 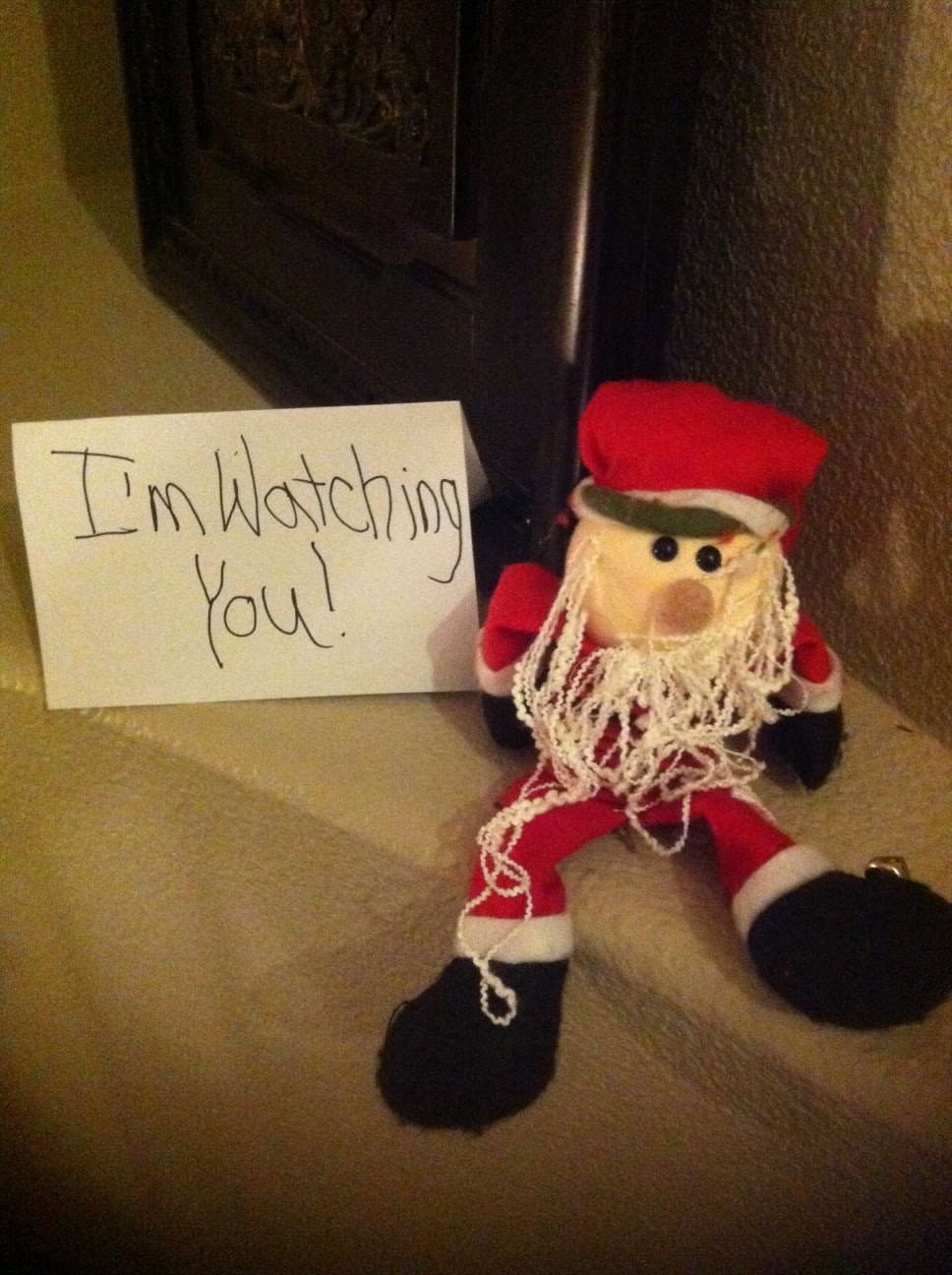 Now that I'm looking at him, I think maybe it's supposed to be Santa? His beard is LITERALLY hanging by a thread so I'm not sure. Also he's pretty skinny. Do elves ever have beards? Looks like he's missing one of the bells from his shoes, too. Well, hell, what do you expect? It was a dollar.

You'll also notice I added a note. I'm pretty sure my kids are clueless to the elf thing, so it's possible he would go unnoticed if I didn't do at least that. Look how creative I am. A NOTE. I cannot BELIEVE I'm starting this of my own accord. What an idiot.


See this banner? Make me look like less of an idiot and click on it, would ya'?!