We spent most of Sunday doing our annual pumpkin carving. It has never been an activity I've been particularly fond of, but I've actually come to dread it in recent years. Here's why.


These days, if your front porch doesn't look like this on Halloween, you are an embarrassment to the neighborhood. 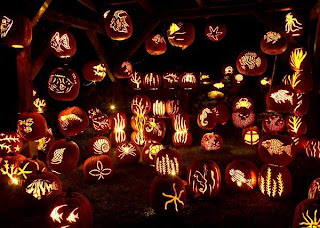 This used to be a perfectly acceptable jack-o-lantern.

Ask for forgiveness and promise to do better next year, you useless slacker.

Okay, so I'm exaggerating. But you've seen those people. Twenty plus pumpkins lining their walks with intricate carvings and etchings and fancy initials making the rest of our sad little jack-o-lanterns feel sub-par. We go trick-or-treating and the kids cry, "Why can't OUR pumpkins look like that?! I want a ghost/black cat/rendition of Van Gogh's 'Starry Night' on our front porch!", as I walk away with my head hung in pumpkin-carving failure shame.

They have seen those carving kits in the grocery store (I am CERTAIN that Martha is behind that racket) and the children consequently INSIST that we do more than triangle-eyed pumpkin heads this year. I look it over, and although it appears to be significantly more time-consuming than I'd hoped, it seems doable so I oblige.

After lunch, Charming set up the pumpkin-carving station IN THE LIVING ROOM. I'm all "WHAT are you doing? It's going to get EVERYWHERE!", and he's all "The Cowboy game is on" and "priorities" and "if you want me to help, then this is where it's happening," so I shut up.

He cut the bottoms out of the pumpkins for us, then the kids and I took them into the yard to clean them out. He usually helps with this part, "but football!" He had a rough week at work so I thought I'd be nice and give him a reprieve on this year's pumpkin gut removal. I made the kids do at least part of theirs, but that (of course) got old in a hurry, so I took over and finished for them.


Charming came out at commercial to see how it was going and take pictures. He's such a team player.


Half an hour later, I'm elbow-deep in pumpkin guts and we're finally ready to start the actual carving. Everyone had picked out their patterns and were ready to get to work. It wasn't until I had already started that I realized I had picked out a 'Master Level' design. Oh, good. This should end well.

TWO HOURS LATER...all three carving tools broke. We were each about 75% complete, so I was left with little choice other than to go back to the store for more tools. And I might as well get some wine while I'm there.

Another hour or so after I returned, we FINALLY finished. To my surprise, outside of the one break to run around for a while in the backyard, the kids remained on task and did most of the carving all by themselves. A nice change from last year, where Charming and I ended up doing most of the work.

FOUR HOURS of family fun. The jack-o-lanterns will only last 3 days, but the memories will last a lifetime. Or at least until next year when it's time to do this all over again. 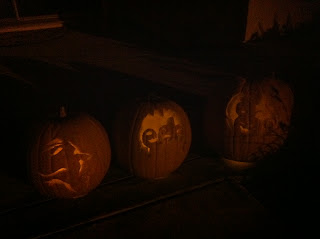